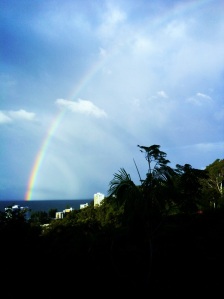 Red, yellow, pink and green, purple, orange and blue. The spectrum of light and our love for light, colours our sense of space. In essence, the way our environment is coloured is as a result from sciences affair with the transfer of light and our ability to process those equations.

Rainbows are an optical phenomenon that brings spectrums of light to view. The continuous spectrums of colour almost appear as smears of coloured bands, though not technically lines or bands for that matter. Rainbows form essentially as a result from the atmosphere’s supernatural elements.

Scientifically, as light enters a water droplet, light is refracted on the inside of the outer-layer of the water droplet, and again refracted when leaving. The transfer of light into and out of water droplets trigger the capture of light, which forms the process to create coloured arcs. Therefore, rainbows become visible to the naked eye due to the spatial change of light refractions.

What is interesting is the overall effect due to the wide range of angles that are independent of the size of the water droplets and refractive index. Since seawater has a higher refractive index than rainwater, the radius of rainbows amongst salt-drenched air will always seem smaller.

Scenically, rainbows become part of a process that rearranges our brain waves to peaceful thought pattens and desires about finding that pot of gold. The photo attached ignited this tangent, where I believe the pot of gold is essentially the ocean. And even though the rainbow may be smaller than a true rainbow, the beauty that follows brings us to science – as we are part of science processes.